The Bulrathi are one of the major civilizations in Master of Orion.

The Bulrathi is one of the first ten original races that was introduced within Master of Orion in 1993. While Bulrathi undergo several changes to their physical appearance with each following sequel, their core identity as an Ursoid (bear-like) warrior race and the best soldiers/ground combat specialists in the galaxy stayed the same.

The Bulrathi are a fierce bear-like race that possesses incredible strength and constitution. No other race can match the Bulrathi in personal combat, giving them a +25 bonus in all ground attacks.

Bulrathi players should always attempt to take colonies with ground forces even if outnumbered.

A large, bear-like people, the Bulrathi possess tremendous strength and hardiness. They evolved on a high gravity (High-G) homeworld, and thus are able to colonise High-G and Normal-G planets without penalties. The Bulrathi enjoy a 10% bonus in ground combat and a +20 to the Ship Attack of all their ships. Their government is a Dictatorship.

The Bulrathi, unmatched in brawn and brute force, will use any advantage to attack their enemies. They are peerless in hand-to-hand combat, and only a fool would fight a Bulrathi on the ground if given a choice. While notorious for their gruff manners, they are the champions of the weak and exploited. The Bulrathi also care deeply about their planets, focusing their scientific resources on terraforming technologies and pollution control.

The harsh Ursa System is home to the Bulrathi, a ferocious warrior race committed to the preservation of nature. Fearless and brutal in combat, they rely on their strength to overcome opponents while their heavily armored fleets withstand wave after wave after wave of enemy attacks.

Fiercely territorial, they are usually reluctant to strike the first blow, but they will go toe to toe with anyone who wanders into their domain.

Their rich spiritual life revolves around the Hag, an elder who speaks for nature itself. It was the will of the Hag that pushed the Bulrathi into space, as they sought to place the entire galaxy under their protection, by any means necessary.

While the Bulrathi may care for the welfare of lesser creatures and the well-being of planets, they are still a hot-headed and aggressive race prone to starting interstellar brawls. They are known as brutal conquerors throughout the galaxy, using their raw strength to get their way on the galactic stage. The reckless force behind their policies seems ironic when paired with the pure-seeming intentions they promote. At the end of the day, the Bulrathi only respect those who can match them in battle and those who do not back away from adversity.

The Bulrathi Emperor exemplifies the contradictory nature of the Bulrathi: noble protector and ruthless destroyer. The Emperor is a dictator counseled by various political organizations which serve the military, economic, social, and other necessary needs of an empire. Thousands of years ago, the planet of Ursa, homeworld to the Bulrathi, was ravaged by warfare and disastrous environmental policies. A small band of Bulrathi scientists devoted their lives to developing rare machines that could breathe life back into the damaged planet... bringing about one of the earliest known terraforming events in the modern universe. The process was a success and Ursa was successfully terraformed into a sustainable planet once more, but the technology was lost to the Bulrathi over many generations that made a mockery of "weak" scientists.

The terraforming was a major event in the collective psyche of the Bulrathi. The death and resurrection of their home planet is remembered primarily through their belief system. Their past mistakes have made them into protectors of the defenseless and champions of planetary protection policies. The wounds of time have not healed for the Bulrathi, and they will bring ruin to those who do not heed their warnings.

The Bulrathi are legendary practitioners of the “brute force” approach. With their penchant for ground combat and their overall hardy nature, they are favorites of aggressive players. The Bulrathi are not inclined to patiently play mind games on the galactic stage, being far more comfortable kicking down doors, weapons in hand. What they lack in subtlety they make up for in strength, though they are not villainous or unkind.

The Bulrathi are legendary practitioners of the “brute force” approach. With their penchant for ground combat and their overall hardy nature, they are favorites of aggressive players. The Bulrathi are not inclined to patiently play mind games on the galactic stage, being far more comfortable kicking down doors, weapons in hand. What they lack in subtlety they make up for in strength, though they are not villainous or unkind. 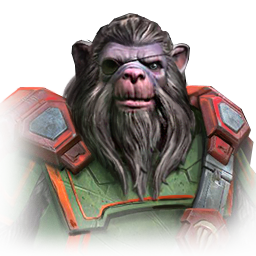 The Emperor of the Bulrathi is chosen from the officer corps, typically being one who has been amply tested on the bloody fields of combat. The Emperor serves as the supreme power in issues of domestic law and governance, but his authority is most conspicuous when overseeing galactic warfare. The military calls the shots in Bulrathi society, and the Emperor reigns over the military with ultimate and unquestioned might. However, as with Bulrathi society as a whole, the Emperor himself is not unkind or cruel without reason. The Bulrathi people remain fixed on their principles of ecological preservation, the integrity of lesser lives, and respect for the Bulrathi way… even if that means war.

Kuruk embodies the values that form the foundation of Bulrathi society: respect for elders, deference to those who have served in the military, and veneration of the Bulrathi way of life. Kuruk, wise from battle and years of war, serves as the High Chancellor, a role created by the War Trust to give time-tempered advice to the often hotheaded Emperor. Kuruk serves the Emperor without question or hesitation, never straying into the dangerous territory of treasonous dissonance.

Grak is a ship leader who appeared in Master of Orion II: Battle at Antares, a Famous Bulrathi Captain who is a Security expert, excellent Commando leader for our ground troops, and improves Operations cross our empire.

The planet of Ursa is beautiful beyond compare, protected and cherished by the Bulrathi people. But Ursa was not always so delightful. At one time the planet stood on the brink of ruin by industrial pollution and resource-exhausting wars. A small band of Bulrathi scientists devoted their lives to developing rudimentary planetary technology that would save their planet. Today Ursa, restored to lushness and ecological stability, is holy to the Bulrathi people. It is the mother and the womb of the Bulrathi, regarded with the highest respect and reverence.

Ursus, the capital city of Ursa, is a densely packed urban area with a layout that confuses many foreign visitors. The Bulrathi, never known for deliberate and careful design, have a very flexible view toward city planning. It’s common for a building to be there one day and demolished the next, with a different building up within the year. The Emperor and his War Trust are located in Ursus, giving them close access to the Empire’s primary military and manufacturing facilities.

The Bulrathi have a special attachment to Ursa, uniquely formed by the planet’s close brush with destruction. Ursa is also deeply associated with the Bulrathi spiritual leader, the Hag, who guides them in their protective attitudes on planetology and environmental policies. Even those Bulrathi born on distant colonies or in deep space have a primal longing for the cool grasses and horizons of home. As the Bulrathi saying goes, "Those who have never touched the surface of Ursa have its image scored deepest in their hearts."

Countless years of war on their homeworld have shaped Bulrathi mentality about war, which has heavily influenced the designs of their spacecraft. While many say that "the best defense is a good offense", the Bulrathi would say the best offense is having a good defense and overwhelming force.

Basically all their spacefaring vessels, from lowliest civilian ship to the mightiest warship, are all designed to be literal tanks: heavy armored plating along reinforced hulls capable of taking a lot of punishment and still keeping going. It is said that a Bulrathi ship is able of ramming through a enemy ship without getting a scratch; while this may be overly exaggerated it still holds a kernel of truth.

The Frigate is the smallest ship of the Bulrathi fleet but still packs a powerful punch. The Bulrathi place no priority on aesthetics, preferring straightforward ship designs that allow for ramming, and while their frigates may appear clumsy, no enemy should underestimate their power. Bravo-pattern frigates have a leaner, more forward-heavy design that emphasizes robust frontal defenses.

Destroyer-class ships are a staple of the formidable Bulrathi fleet. The heavy-handed design, painted in the bloody colors of the Empire, emphasizes brute force and seeks to strike fear into any opponent. The bravo-pattern ships have a sleeker, more simplistic design.

The Bulrathi cruiser is one of the most distinctive ships in the galaxy. Its puzzling design is intended to confuse enemies who are unfamiliar with its configuration. This unique defense system has made this model of ship popular, even though it takes crews weeks to memorize the bizarre internal layout. Alternate designs of the cruiser are more traditional, as demonstrated by the bravo-style cruiser.

Bulrathi battleships embody the spirit of the Empire: bold, aggressive, and intimidating. They are among the most durable ships in their class, able to take a severe beating before faltering. It is a common sight for the hull of a Bulrathi battleship to be embedded with fragments of enemy ships. The bravo model is less likely to survive close combat, but is slightly more aerodynamic.

The titan-class ships embody the same confusing aesthetics as the Bulrathi cruisers. Enemies take an extra moment to calculate their strikes, and in that time the Bulrathi have already taken advantage of their hesitation and fired. The bravo-pattern titans are more straightforward in design but equally fearsome.

An uplifting sight to allies, terrifying to foes, the mammoth Bulrathi doomstar is capable of dealing swift and severe damage. This is the culmination of the Bulrathi design mentality: direct, brutal, overwhelming delivery of force.

The Bulrathi traits cost a total of 11 points, a combination that would be illegal as a custom race (10 points maximum). In addition, Ground Combat Rating is a hidden perk, not normally accessible for custom races.