As part of the Unified Community Platform project, your wiki will be migrated to the new platform in the next few weeks. Read more here.

The Darloks are one of the major civilizations in Master of Orion.

The Darlok is one of the first ten original races that was introduced in Master of Orion in 1993. While the Darlok undergo several changes to their physical appearance with each sequel, their core identity as a backstabbing race of shapeshifters and the best spies in the galaxy stayed the same.

The Darlok are a ruthless race of shapeshifters capable of taking on the form of nearly any living being. This unusual ability to change forms makes them superior spies and allows them a bonus to all sabotage, espionage, and security functions. Darlok spy networks cost only half as much as other races’ spies. The Darlok add +30 to their Spy Fate rolls and add +20 to their security. Of course, no one trusts a Darlok.

Darlok players should concentrate on one or two areas of technology for a technological advantage and steal the rest.

A race almost as enigmatic as the ancient Antarans, the Darlok are shapeshifters who can assume almost any humanoid form. As a result, Darlok spies are 20% more likely to be successful on any mission. Their early research has run along lines parallel to their evolution, and so Darlok pilots have the ability to render their ships invisible to long-range detection. These mesomorphs' government is a Dictatorship.

The ruthless, shapeshifting Darloks are the ultimate spies. They often rely on their exceptional espionage network to give them a diplomatic, economic, and military advantage. The universal distrust they face has made them (and other races) paranoid in interstellar relations. This overwhelming distrust and loathing motivates the Darloks to steal, sabotage, assassinate and manipulate their way into power.

Elusive and paranoid, the Darlok of Nazin both crave and despise identity. Their shapeshifting nature puts them at odds with themselves as often as with other races, since they neither trust nor can be trusted.

They constantly scheme from the shadows, while their agents hide in plain sight to serve the purposes of the Cabal.

Scavengers by nature, putting together elements from different sources into mismatched but effective patterns.

The Darlok eschewed open conflict, and would rather sap their enemies’ strength or place them on a collision with another race before moving in for the final blow.

The Darlok struggle to understand what is "real" in the universe, as they are able to bend the way that the galaxy perceives them with their shapeshifting abilities. The self is the only thing which is knowable in the universe; everything else is blurred by individual perception and illusion. The greatest fear of any Darlok is that they forget their true self and cause. The history of the Darlok race is shrouded in mystery and myth.

It was said that early interstellar travelers landed on the Darlok home planet of Nazin many thousands of years ago. It was the first time that the Darloks had encountered an educated life form (which happened to be humanoid in appearance). It was the first time that the Darlok imitated another race's appearance, but the surviving travelers described it as a nightmare. When the colonists fled from that "cursed and haunted" planet, they left behind the infrastructure and technology that jump-started the Darlok civilization.

The Darlok operate a dictatorship called the Cabal, ruled over by their Hindmost. The Hindmost relies heavily on spying, digital theft, and intelligence agencies in order to confidently rule the Cabal. The Darlok are excessively paranoid and xenophobic, but the Hindmost relies on his advisors to bring all knowable assets to the table. The Darlok operate as many independent agencies secretly serving the whole of the Cabal (and thus reducing the direct association to the government as a whole). The Hindmost oversees efforts between these agencies to reduce the risk of working against each other. So the Darlok continue to stalk the dark corners of space, stealing from the races whose form they take in order to advance their own civilization.

A race with few other advantages, the Darlok must rely on spying, manipulation, and blackmail to eke out an edge over other races. It takes an unconventional and resourceful player to excel while overseeing the galaxy’s most feared shapeshifters: those who play as the Darlok must favor subtlety. Nevertheless, this race has a loyal following among players. 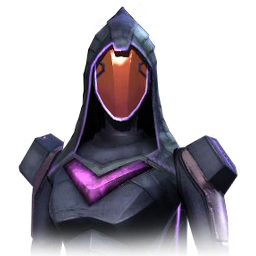 The Hindmost of the Darlok Cabal is a master among the peerless spies of the galaxy. The Hindmost is tasked with making the final call in acts of galactic subterfuge and must also pay the price if the Darlok agendas are uncovered.

In a society where secrets and information are power, the Hindmost must always be as omniscient as possible while never revealing sources of intelligence.

This is a thankless job with little glory in a culture where sticking to the shadows is the secret to success. In times of war, the Hindmost is tasked with uniting the fragmented Darlok militaries and agencies into a cohesive instrument of power.

Vale, trained in the shrouded ways of the most elite Darlok spies, was so good at her job that she could no longer do it. Tales of success attributed to her, whether true or not, forced her into early retirement.

She maintains her connections as the Whisperer to the Hindmost, collecting secrets that can tear apart empires or form lasting bonds of desperation. In this role, she can still pull the strings of the deadly and shadowy underground that she calls home.

Draxx is a colony leader who appeared in Master of Orion II: Battle at Antares, a Darlok Assassin and Spy Master for hire. He is cheap because his abilities as a colony leader are limited, but useful for any civilizations with a low counter-espionage rating. You could always hire him and then dismiss him if a better Assassin / Spymaster / Telepath comes along.

In the far reaches of the known universe is a dim star which cloaks the surrounding region in murky shadows. This star supports life on Nazin, the mysteriously veiled planet that is the home of the Darlok race. One side of the planet always faces the star and is under constant grey cloud cover, while the other side of the planet remains in constant darkness. Nazin is the only place in the galaxy where the Darlok do not feel hated, feared, or persecuted because of their shapeshifting ways.

The capital of Nazin is the city of Tsslac, built upon snarling wires and cables stolen from the wreckage of alien civilizations and outposts. Ancient ruins of unknown origin indicate a deeper, darker history to the Darlok homeworld, though that information is kept shrouded in ambiguity and rumor. Visitors to Tsslac may recognize fragments of their own civilizations: a dealer peddling stolen Mrrshan weapons, a salvaged Bulrathi door propped up in an alley, or a length of Meklar superconducting cabling stretching between buildings.

The Darlok are accustomed to being hunted and persecuted throughout the galaxy—a situation that might well be considered justified, based on their actions. Nazin is the only place where they can feel comfortable walking around in their own skin, not having to pretend to be what they are not. Among the waxy leaves, sprawling mosses, and colossal mushroom-like plants of home, the Darlok experience a piece of something that they are so desperately searching for: identity.

Like most things with a Darlok’s life, stealth and deception is key. Everything from their clothes they wear to the tools they use, even their weapons, are either designed to avoid detection or allow a Darlok to blend in the crowd in some way or form. So it comes as no surprise that they apply this same design philosophy to their ships.

While it is true that each ship in the Darlok fleet is a mix-and-match Frankenstein abomination of different pieces of savaged or stolen technologies and architecture all welded together, they are also a testament to the Darlok’s skill and ingenuity that enable them to create something that is not only functional, but also very effective.

Designed for striking shadow, all Darlok ships are known in the Galactic Community as "fins" due to the unusual but innovative fin-like design. This unusually flat and thin design offers very little surface area for weapon strikes and in combination with Low-Emission Drives, Quadrate Stealth Generators, Multi-spectral Stealth Pinions, Multi-Spectral Stealth Panels and black and dark color Camouflage paint covering, the hull makes Darlok ships very hard to hit and gives them a level of stealth to the nth degree.

However with so little room for armor, Darlok ships are left very vulnerable and one well-placed hit can devastatingly cripple a ship. That's why most of the time Darlok ships run away from conflict, unless they are the ones able to get the jump on their enemies or lure them in the ambush.

The Darlok frigate-class ships are the first to boast the innovative “fin” design. From the front, these ships offer very little surface area for strikes to land. They cut through the skies with impressive speed, whether fleeing from battle or flying into the fray. The bravo model also has a thin frontal aspect, but spread horizontally rather than vertically.

As the ships of the Darlok Cabal become larger, the amount of stolen materials that comprise them becomes more obvious. While the unmistakable Darlok “fin” pattern is present, the core of the ship is made from salvaged materials from many empires. Bravo-pattern ships use black panels to hide segments with salvaged parts.

Darlok cruisers are among the fastest ships in the Cabal’s fleet, often showing up as first responders when isolated Darloks are in danger. Cruisers have flayed rear segments that mask the exact location of salvaged engines. The bravo model of the cruiser prioritizes a sleek and more covert appearance.

The battleships of the Cabal have the largest “fins” in the fleet, housing many of the crew stations and weapon bays. However, enemies who focus their fire on the fin often lose sight of the equally deadly main body of the ship. The increase in surface area often means that enemy attacks leave critical sections undamaged, leaving the battleship ready for retaliation. Alternate designs for the battleship feature sharp edges and multiple “finned” panels.

The Darlok titan-class ship is very close in configuration to the successful cruiser models so favored within the Cabal’s fleet. The design of the smaller ship is scaled up drastically, with improvements where necessary. The bravo titan follows the trend of alternate designs that focus on stealth and covert appearances.

The doomstar of the Darlok Cabal is a Frankenstein machine of epic proportions. Each ship is unique in its subtle modifications, often demoralizing enemies by incorporating the salvaged remnants of their own failures.

The Darlok traits cost a total of 12 points, a combination that would be illegal as a custom race (10 points maximum).