The Elerian are a race in Master of Orion.

This race was not featured in the original Master of Orion.

The Elerians are one of three new playable races that was introduced within Master of Orion II: Battle at Antares in 1996. Unlike most of races in the MoO Franchise (with the exception of the Humans), the physical appearance of Elerians undergoes very little change and is petty much the same as when they were first introduced.

The warrior castes of the Elerians are the only face most outsiders ever see. This humanoid society is matriarchal, and to date only females are allowed to join the military. Those who do are provided with the best possible training. Thus, Elerian ships gain a 20% defensive and 20% offensive bonus in combat. While the females fight, the all-male philosopher caste has developed incredible mental powers. Their meditations have produced remote knowledge of every system in the galaxy, and their telepathic powers are second to none. The Elerians' social structure is strengthened by a Feudal government in which only the warrior castes hold positions of power.

The Elerians are a matriarchal race of female warriors led by the Grand Marshal. Only females may enter the Warrior caste and lead the Elerian people. The men belong to a Philosopher caste that forms the support and scientific prowess of the empire. Xenophobic to the extreme, the Elerians strive to maintain the purity of their race by keeping others at arm’s length. In a quirk of genetics all Elerian women are telekinetic while all men are telepathic to varying degrees.

Born of the myriad islands of Draconis, the Elerians are a feudal civilization with a rigid caste system and immutable gender roles.

At the top of their social order sits the Grand Marshal of the Fiefdoms, a warrior of great renown who binds all the Elerians to her will by military prowess.

Only females may enter military life at any rank. Their males are relegated to the college forums, where they form the Philosopher caste, always studying and pushing their race's strange mental powers to new limits.

The Elerians are a feudal matriarchy of honorable and xenophobic warriors who demand total respect from the inferior races of the galaxy. Enchanting and ethereal, the Elerians do not consider other races to be their peers. Obsessed with the purity of Elerian culture, they maintain a cold distance from the rest of the universe. Beneath their beautiful exteriors and distant ways, they hide the hot-blooded ways of a feudal warrior race with no sympathies for other societies. The women are a telekinetic warrior race, with a small group of male telepathic philosophers who can see into the minds and hearts of others on a limited basis. The Elerians devote themselves to strict codes of honor, integrity, and purity. Those who do not respect the firm boundaries of the Elerians will face a mighty retribution. The filth and refuse of the universe has washed up on the pristine shores of Draconis, causing the usually withdrawn race to take to the stars in order to push intruders from their sacred space. The only mercy available to the savages of the wild stars are a cleansing fire, saved from their own impure ways by a clean death. 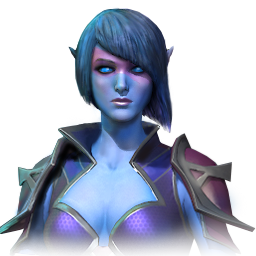 Cassandra is a colony leader who appeared in Master of Orion II: Battle at Antares, an Elerian Telepath who is a skilled Diplomat, a great Environmentalist and Spiritual Leader for your colony. When hired she will bring Elerian Telepathic Training techniques with her, allowing you train our own telepaths.

The Elerian traits cost a total of 16 points, a combination that would be illegal as a custom race (10 points maximum).