From Master of Orion Wiki
(Redirected from Humans)
Jump to: navigation, search

Humans are one of the major civilizations in Master of Orion.

The Humans are one of the first ten original races that were introduced within Master of Orion in 1993. The Humans’ physical appearance is very much unchanged and they have been a playable race in each sequel.

While man may be physically weaker than many of the other races, his talent for trading and generally amiable nature has made him one of the best diplomats in the universe. Humans receive an additional 25% profit when trading, double the effect of good diplomatic actions, and add +5 diplomatic levels when offering treaties and trade agreements, and in the High Council.

Since the Humans’ advantage is gained from interaction, human players should immediately begin making deals with other races.

Humans are the galaxy's most charismatic race; they're the dealmakers and diplomats. When dealing with any other race, Humans gain a 50% bonus to their diplomatic efforts. Furthermore, the ever-flexible Humans have great cultural diversity, and as such assimilate conquered colonists with seeming ease. Mercenary leaders are eager to work with the Humans; their hiring prices are lowered for this race. For some reason, they still cling to a Democratic form of government.

The Humans are the master manipulators of the Orion Sector, and have ruled or actively attempted to do so for thousands of Galactic Cycles. Sly and greedy, they take by force only what they cannot take through negotiation or trade. Recent Humans claim to be descendants of the Ancient Orions. Although most empires of the Orion Sector scoff at the arrogance of such a presumption, there is enough uncertainty in Humanity’ s origins to lend credibility to this “ancient legitimacy”...

The charismatic Humans have overcome millennia of internal divisions to present a unified face on the galactic stage. Humans enjoy friendly relations with all races, but when crossed they can become bitter enemies. While they pride themselves on diplomacy and honor, the Humans will fight to the death to protect what they believe in.

After ages of internal conflict and faced with dwindling natural resources on their home planet of Earth, humanity finally came together to form a consolidated government, replacing the many nations once dotting its political landscape.

This new government brought unification, eroding long-held distinctions based on race, color, creed and gender. Humanity thrives and at long last reached for the stars.

Now out of the Sol System the Human Republic arises.

The Humans always seem to see themselves as the underdogs of the Galactic Senate, even when they hold great power and influence. They act as if they do not care who likes them, yet are highly motivated by the opinions of others. They desire interstellar respect on the political stage, yet are constantly beset by internal divisions. However, they are united in the fear that their race may one day be exterminated. The protection of their people is the strongest motivating factor for Humans. Sol, the long-suffering homeworld of the Humans, has been on the brink of destruction more times than the Humans can count. Ravaged by countless wars and severe ecological disasters, early Human society had an abundance of experience in surviving disasters (especially those of their own making). By the time the Humans became concerned with their actions and began the unified effort to save Sol, it was too late and the planet was set on a course of decay.

In their time of dire need, the Bulrathi made a chance encounter with the Humans. The Bulrathi, who had already survived the near destruction of their homeworld, offered the Humans rudimentary planetology technology in order to partially revive Sol. With that kindness, humanity was able to rally and continue the efforts of revitalizing Sol. The Humans have a democracy where all citizens vote on major issues. Presidents are elected for 8-year terms and are served by their many consultants, political groups, and advisors. All advisors, from the Chiefs of Staff, who oversee the combined Human military efforts, to the Xenorelations Council that focuses on international affairs of diplomacy, are focused on making the Human race a force to truly be reckoned with in the galactic age. The Humans, declaring their place in the universe, refuse to fall after coming so far.

The Human race has a bloody history. Centuries of constant conflict have left them stubborn and seemingly aggressive to some species; however they have also learned the values of perseverance and duty. Humanity has come a long way in a short time. Not long ago they existed as 200+ sovereign nations, each with its own agenda. Now they've learned to look past their differences and form a unified republic, but it was not without fault. The early days of de-nationalization sparked global conflict which culminated in a space race between two major powers. Both built and launched colonial vessels, but only one arrived safely; the other wouldn't be heard from again for almost 200 years.

Humanity exists now as a noble species who put trade and diplomacy before military might but that's not to say they will not stand up for themselves. There's an old Human expression they like to use when speaking to the other powers of the galaxy, "Speak softly and carry a big stick." This philosophy is at the very heart of mankind's interaction with the wider galaxy. Led by a President, the Human Republic has been known to be a stabilizing force and has almost never refused to aid a civilization in need. The Humans are also known for their military might, which they use mostly for defensive purposes.

The Humans are the charismatic underdogs of the galaxy… or at least they would like you to believe that. The Republic of Sol and the citizens of Earth may be popular and sociable, but accepting them as harmless can be a fatal mistake. The Humans can be cunning in war, although they can also sometimes be conniving to the point of self-destruction. Those who choose to play as the Humans will have the option of making use of their amicable nature as diplomats or their brazen military ambitions. 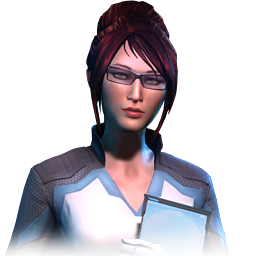 The President of the Human Republic has come to serve as a unifier for the diverse population of humanity. The President is elected by the people, and while the race can often be close and divisive, upon election the President serves to bring together the various factions. Local and regional governments still hold much of their historical autonomy, but the Leader of the Republic is truly the face of Humanity. The President may not have absolute control across all branches and services of the Republic, but his or her word is ultimately what incites war or facilitates peace.

A child prodigy hailing from Earth, Victoryia was an accomplished Olympic athlete for her Region. In this highly publicized role she became a tool of propaganda; at the same time, she was serving as a highly effective successful intelligence agent. Approached by many businesses and agencies for her intellect and experience, she joined the campaign of the current President because she truly believed in his message. Victoryia is a priceless asset to the regime, devoting her connections and experience to furthering the agenda of the President.

The capital city of Sol rotates; upon election, each new President chooses its location. It is a high honor for any city, and in turn boosts tourism, industry, and commerce in the area. The cities of Sol showcase the diversity and culture of the Human race. Visitors from across the galaxy come to listen to the songs, gaze upon the architecture, and sample the varied cuisines of Humanity.

Humanity will always remember where they came from, even as their domain stretches far across the galaxy. The concept of home includes reverence for the way that things were, for the stories of your ancestors, for the history of your people. The lessons that the fledgling Human Republic learned from their more precarious days on Sol remain with them even as they become power players in the crowded galaxy.

The Human traits cost a total of 10 points, a combination that would be legal as a custom race (10 points maximum); however security -20% is a hidden perk, not normally accessible for custom races.

You must explore and find planets to colonise. Resources, research and food are important. Building up your military will protect you from pirates and from invasion by other life forms.