From Master of Orion Wiki
(Redirected from Klackons)
Jump to: navigation, search

Klackon are one of the major civilizations in Master of Orion.

The Klackon is one of the first ten original races that was introduced within Master of Orion in 1993. While physical appearance has undergo several changes with each following sequel in the MoO Franchise, their general appearance of ant and/or mantis insect-like creatures stayed the same.

The Klackons are a large ant-like race with an extremely ordered society. Each individual is born to serve a single purpose, and does so without question. As a result, the Klackons are mobilized into an industrious society where each unit of population produces double the output of other races. The Klackon’s bonus is cumulative with planetology bonuses. Klackons excel in quickly making productive new colonies.

The Klackons are an insectoid people from a large home world. Though they're not exactly a hive mind, the Klackon communications system is fast and efficient, and the population is completely satisfied with their lives. This is reflected in their extreme industriousness. Klackon farmers produce 1 more food each than those of other races, and their workers also give +1 to production. The entire race communicates, thinks, and operates virtually as one. All this makes the Klackon practically, if not actually, a shared consciousness, and has paved the way for their successful Unification government. The down side to all this thinking alike is that the Klackons are rather Uncreative.

The Klackon Hive Mind is the ultimate picture of a harmonious society working for the greater good of all. The Klackons revere this purity of social form, not even noticing the cost in creative or original thought. This unity of purpose makes the Klackons brutally industrious and organized, with leaders born for their tasks and directing the masses without question.

The Klackon Hive is virtually free of all rebellion and resistance to social order. Klackon are born knowing all they need to know of the world and their place in it. Each individual fulfills a role in society that they were meant to perform without question. The concerns of inferior races are foreign to the Klackon; as a result, they lack the ability to empathize with the plights of others.

Deep in the caves of Kholdan, the insect-like Klackon evolved to form the Hive, a unified consciousness stretching from Drone to Queen.

As such, the industrious Klackon have no individual needs, no desires and no ambitions other than the benefit of the Hive itself. This effectively makes them tireless workers and fearless warriors, each and every one willing to give their lives for the Hive.

Having nearly exhausted their home planet, the Hive has begun its galactic expansion in search of more resources and room to grow.

The Klackon, born into their societal roles, live in perfect harmony. They work for the good of the community rather than serving the desires of the individual. In fact, the Klackon are seemingly born without personal interests, assuming the identity of the Hive from birth. They do not worry about traitors or morale, and as such are one of the few domestically at peace races. Kholdan, the home world of the Klackon, is a harsh planet under the gaze of a relentless sun. Most of the edible vegetation of from Kholdan is encased in a thick shell which must be cracked in order to access the softer flesh. Kholdan's viable water reserves are connected in a vast series of interconnected underground caverns, where the Klackon build their elaborate subterranean cities.

The early history of the Klackon is mostly unremarkable due to their lack of internal struggle. The Klackon began as mindless insects who were solely motivated by the demands of survival on a harsh planet. Over many millennia, the Klackon became more intelligent and aware but the Klackon identity remained unchanged.

They are still bound by duty, evolution, and tradition. The Klackon have a unification government which is headed by a Queen who serves as a galactic representative of the race. The Queen's role is to make critical decisions on behalf of the Klackon hive on the intergalactic stage. The primary intergalactic agenda of the Klackon is to protect the people at any cost. Every citizen, from the Queen to the lowest worker, will fall into place and die for the sake of the Hive.

The Klackon are a good fit for those whose playstyle emphasizes rapid production. The single-minded nature of the Klackon Hive makes them extremely efficient at manufacturing, and they are a favorite among ambitious players.

The Klackon care relatively little about the rest of the galaxy, instead preferring to devote their focus wholly onto the needs of the Hive.

They will expand as far as the Hive requires, taking what they need to sustain their impressive empire... by force if necessary. 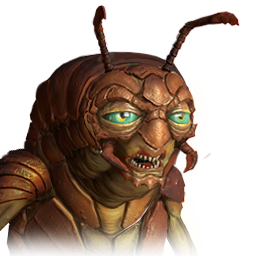 The Queen of the Hive is absolute in her resolve to the interests of the Hive. Completely in tune with her people, the Queen reigns with the peace of mind which only comes from total accord on a biological level.

The unitary consciousness of the Hive leads to a peaceful domestic front but, increasingly, galactic affairs interfere with the tunnel vision of the Klackon Queen.

Her perspective must remain on the Hive in all matters and even a momentary vacillation can cause her to be forcibly removed from office. It must never be forgotten: the Hive does not serve the Queen, the Queen serves the Hive.

Fusca was born of the same egg clutch as the Queen, and may even have served as ruler of the Klackon if the birth order had been slightly different. As it stands, Fusca serves the Queen devotedly and borderline obsessively. His commitment to serving the Queen is more passionate than even the mandates of the Hive require.

Fusca has trained to know the Queen better than he knows himself, and serves her wills and needs before his own. It has been this way since birth and he neither knows nor wants any other existence.

Claw is a colony leader that appeared in Master of Orion II: Battle at Antares, an Klackon Farming and Labor Taskmaster that has broken off from the Klackon Hive-mind for some reason. When hired he does not only increase Farming and Manufacturing of your colony, but also improves Operations cross our empire.

Amber sands whip across the face of Kholdan, giving the impression of a starkly beautiful but empty wasteland. However, beneath the surface, tunnels buzz and teem with unceasing activity. The insectoid Klackon have built an impressively complex civilization in the cavernous interior of the planet. Kholdan spins madly through the universe, boasting incredibly quick solar cycles that suit the hectic and efficient workdays of the Klackon race.

Metztli is the largest city on Kholdan and hosts the seat of the Queen. Metztli is unique in that, although it is built primarily underground, it also extends, above the surface with spiraling towers of sturdy rock. The city is centrally located in the tangle of tunnels that connect the major cities of Kholdan. The Queen’s Nest is an ancient den that has seen the births and reigns of countless Queens.

The Klackon are an anomaly in the bustling and expanding universe. Even as they grow and their reach expands, the Klackon remain completely in harmony with one another. Without any hint of domestic unrest or turmoil, the Klackon keep their sights on expansion. To provide for the Hive is the greatest honor, and the interests of the Hive are the interests of every individual. Kholdan is where the Hive took their first steps together, and now they are ready to take their unified vision to the stars.

Klackon Ships fallow both very simplistic, yet complicated design, seemingly to be based on wild or domesticated insect species that native to Kholdan. These very unusual ship designs gives use glimpse in the way the Klackon Hivemind is thinking; "why design our own ships when nature already provides us all the blueprints were need". While this may come off as lazy or uncreative to most outside races, you have to be impressed drive and will of Klackon Hivemind to make something work.

All Klackon ships are a combination of grown and mechanical parts, to the point that they are almost biomechanical in nature. Almost like a giant living organism able to cross the cold vacuum of space and lay down their lives to defended the Hive, many Klackon view these ships not as tools, but part of Hive, these Ships are gigantic Klackon with smaller Klackon inside that acting as both as operators and anti-bodies protecting against any infection that even dares to enter.

Since Klackon Ships are based on animals of their home planet, they got the same weakness are these creatures. While the extremely durable organically grown carapace armor is able to shrug off most attacks, there are many parts of the ships that are exposed making it extremely vulnerable against well-placed attacks. Even Klackon are aware of this, but instead covering these weak points with armor they strengthen those section with the metallic pistons and highly durable tendons working in perfect unity.

All Klackon ships are a combination of grown and mechanical parts. The frigate-class ships are the smallest and most exposed of the ships, with the metallic pistons and highly durable tendons working in perfect unity. Bravo model ships have a series of smaller shell segments rather than the Alpha’s heavier panels

The destroyer-class ships are devastating agents in the powerful Klackon fleet. Destroyers are quick and lethal in combat, their projecting external components useful in both defense and offense. The alternative designs for the destroyer are less elegant and more chaotic in appearance.

Klackon cruisers have a heavily armored shell on the forward hull, making them favorites in highly aggressive head-to-head combat. Grown components of the ship are primarily hidden beneath the sturdy shell, with more mechanical and automated systems located near the rear of the ship. The bravo designs are even more resiliant than the alpha versions of the cruiser.

The battleships of the Klackon fleet are the first to utilize fully removable and replaceable shell panels. Whereas the smaller ship classes must dock to be healed or repaired, the battleship can grow extra panels in case of emergency. The bravo model battleship is much more aggressive in appearance.

The Klackon alpha-model titan is fortified with an extremely durable organically grown carapace. The shell covers the entire top of the ship, with most of the mechanical parts exposed on the underbelly of the ship. The bravo model of the titan is much more streamlined, with less shell coverage.

The Klackon doomstar is an engineering and structural marvel, with grown panels completely encasing the mechanical core of the ship. It is a mighty sight on the battlefield, with many moving towers and panels making the ship seem truly alive.

The Klackon traits cost a total of 8 points, a combination that would be legal as a custom race, with two points leftover (10 points maximum).