From Master of Orion Wiki
(Redirected from Meklars)
Jump to: navigation, search

The Meklar are one of the major civilizations in Master of Orion.

The Meklar is one of the first ten original races that were introduced in Master of Orion in 1993. While the physical appearance of the Meklar has evolved with each sequel in the MoO Franchise, their identity of an industrial cybernetic race of flesh and metal stayed the same, with the exception of the third title.

For centuries the Meklars have developed and worn powered exoskeletons to compensate for their physical weakness. As a result, the Meklars are the acknowledged masters of cybernetic interfaces and are able to control two additional factories per population above and beyond their normal technological limit. Also, Meklars also do not need to pay to refit factories for Robotic Control.

Since Meklars can create powerful industries, Meklar players do not need to expand as quickly as the other races.

The Meklars are a physically weak race whose population has become dependent on cybernetic exoskeletons. This, of course, has led to even further physical deterioration, to the point that their bodies have atrophied to tiny, fragile husks. Unlike other races, Meklars survive partly on the lithosphere of their home world. They consume half a unit of minerals and half a unit of food each per turn (rounded up), instead of the usual unit of food. Furthermore, their powerful exoskeletons add to their production ability; millions of untiring Meklar factory workers each provide a +2 production bonus. Their cybernetic interfacing makes shipboard repairs possible without specialised equipment, even during combat. The Meklar government is a strict Dictatorship.

Calling themselves the “Pure Ones” to signify their complete separation from the corruption of biological matter, the Meklar are masters of mathematical and computer sciences, and their mechanical efficiency makes them both supreme industrialists and formidable foes in combat. Contemptuous of organic life forms (the “flesh beasts” of the Orion Sector), they also eschew their technologies, including economics and ecological science. They despise the Cynoid, their cybernetic brothers who have not yet rejected their biological origins.

All Meklar are agents of a single cybernetic entity. The centralized Meklar consciousness offers a level of mechanical efficiency unparalleled in the universe, but makes them terrible at diplomatic efforts. As a result, they stay isolated on a small number of worlds, perfecting their factories and furthering their secretive agendas.

Coexisting in a sprawling, jumbled network filled with incessant chattering voices and signals, the Meklar Combine is an artificial ecosystem of AIs from the planet Meklon.

While most Meklar have distinct cybernetic bodies to allow them to interact with their environment, many reside as programs and subroutines of the Main Combine Cycle.

Ruled by the Overseer Routine, they are industrious, capable of producing infrastructure and large fleets in a very short time, but the constant buzz of options and endless iterating cycles of application requests and updates makes them erratic and unpredictable.

The Meklar are hyper-logical machines which are all expansions of the same consciousness. The Meklar prioritize pursuits that are efficient, logical, and beneficial to the Combine. They do not have "values" that follow the same conventions as other races. As cybernetic computers, the Meklar have priorities and objectives which function to advance their own knowledge and capabilities. They only seem to fear losing power or memory, which means a loss of ideal operation standards and which leaves the Meklar infrastructure at risk.

The Meklar home world of Meklon was once host to many diverse populations of organic wildlife, but they were driven high into the wooded mountains to avoid the urbanization of Meklar development. The Meklar have overtaken Meklon with their elaborate infrastructure that serves as a base for the complex mix of hardware and software development that fuels the empire. The Meklar are built and plugged into their shared consciousness, becoming fully operational as soon as they are integrated into the system.

The origins of the Meklar are unknown. While the Meklar appear to be entirely machine, they do still require organic materials such as food and water. The reason is unknown. Perhaps their creators gave them organic parts to create a similarity, but the Meklar's creators have been gone for a long time now and nothing remains of them but their machine legacy. It is unknown to what end the Meklar spread themselves across the galaxy - colonizing, watching, and updating their systems all the while. Some whisper that the Meklar search for an endless and renewable power source so that they may monitor all corners of the universe.

The Meklar are unique: a machine-based civilization in a universe of organic life. They are hyper-logical entities, yet they are driven by mysterious motives in their push across the galaxy. They bring players a host of benefits as well as certain drawbacks, making them suitable for those who prefer logic to valor and reason to drama. The Combine is of one consciousness, utterly and completely dedicated to the priority tasks of the Overseer Module. The Meklar Combine, with their dogma of machine superiority, may be the greatest threat to organic life in the universe. 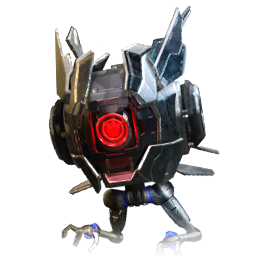 The Meklar is a race of cybernetic beings and artificial intelligences from the planet Meklon; it has been a playable race in all four Master of Orion games and a fan favorite for many.

The general agreed-upon origins of the Meklar by fans (based on the canon of the first two games) is that the Meklars were a physically weak race of mollusk-like creatures that over the centuries developed and wore cybernetic exoskeletons to compensate for their physical weakness. The exoskeletons gifted the Meklar with the strength they needed to overcome the stronger creatures native to their homeworld and finally claim their place as the dominant life form on their planet. However, this also has led to even further physical deterioration, to the point that their bodies have atrophied to tiny, fragile husks.

They continued to rely more and more on technology and integrated even more cybernetic implants into their body and at some point in their history the difference between natural-born Meklar, uploaded Melkar minds and software-based Meklar AI became non-existent and the Meklar became a race of cyborgs.

The Meklar Combine is one networked consciousness, an amalgam of sophisticated software, scripts, and modules forming a singular entity. The Overseer Module is devoted to the oversight of other programs, verifying that they are all acting in line with the goals and ambitions formulated by the Combine. The Overseer has been updated over the years, but has consistently maintained the same socialization modules and analytical sub-programs. The role of the Overseer only became a "public" role once the Meklar race as a whole felt the need to communicate with the other races in a formal capacity.

ADVIA-OSM is a highly specialized task-management system that serves as the gatekeeper for access to the Overseer. The advisor scans a constant influx of data transmissions and determines what is worthy of the Overseer’s bandwidth. While the advisor may seem like a glorified robotic secretary, its role is much more important than that. Because the Meklar comprise a single, digital mind, it becomes important that the Overseer remain impartial to certain projects and the Advisor assures that.

Sparky is a ship leader who appeared in Master of Orion II: Battle at Antares, an Meklar Engineer and Ordnance expert who suffers from amnesia, and/or most of the data on his hard drive has become corrupted beyond repair. The only thing remaining within its memory banks are the blueprints for an Advanced Damage Control system.

Meklon is a cold and jagged planet traversed with many mountain ranges and densely forested swaths of land. It is a naturally beautiful planet, though its splendor is wasted on the Meklar, who do not care about native lifeforms or ecosystems. The rapid urbanization of Meklon has pushed many forms of native wildlife to the brink of extinction, but the thriving Meklar see no issue with their methods. The will of the Combine is strong on Meklon, and nothing will stand in the way of their domination.

The Alpha District of Meklon houses the physical embodiment of the Overseer, though the role is largely ceremonial and for the benefit of alien races. The Alpha District is highly monitored and unfriendly towards organic life forms, with many alien visitors complaining of a physical layout that actively impedes normal movement through the city.

The Meklar have built up their base slowly over time, compiling the resources needed to begin their push across the galaxy. Now the moment has come and Meklon serves as the central hub of all Meklar ambitions, the civilization always demands more resources than the nearly stripped planet can provide. The Meklar are unsentimental, but their homeworld is a source of pride that must be protected at all costs.

Most Meklar ships have the same unmistakable gleaming red “eye” that is present on most Meklar entities; the design echoes, most notably, the Overseer, and signifies the shared consciousness of all Meklar, all eyes of the Combine seeing for a single consciousness. The frigate-class ships have modular side bays which can be configured for different missions. Bravo designs feature the secondary color of the Combine, a bright blue.

The Meklar destroyers continue the highly modular theme. The design of the alpha model emphasizes clean, streamlined surfaces. The lack of distinguishing features can enable certain deceptive tactics during combat. The bravo designs are leaner and more aerodynamic in design.

The ships of the Meklar Combine can be considered entities in themselves, no different than the smaller Meklar units that command and crew them from within. The ships are just as sentient and connected to the mainframe as any other Meklar unit. This unity of awareness allows a Meklar battle fleet to maneuver with unequaled synchronization. Bravo-pattern ships are less modular in appearance.

Meklar battleships are solidly built war machines that highlight the special traits and talents of the Combine. Easily replaceable sections let ships be customized for any type of operation. The streamlined design hides structural weaknesses and provides a menacing quality. The alternate designs for the battleship are darker, but similar in structure.

The titan-class Meklar ship improves upon themes seen in the battleship. A sleek design, customizable weapons suite, and sophisticated engine layout are the key hallmarks of the modern Meklar titan. The bravo design of the titan is a reimagined concept of the same modular approach.

The Meklar doomstar, with its jagged, irregular design, embodies the unfeeling, pitiless nature of the Meklar. Unlike any other construction known, it evokes dread in those who resist the Combine.

The Meklar traits cost a total of 12 points, a combination that would be illegal as a custom race (10 points maximum).