The Mrrshan are one of the major civilizations in Master of Orion.

The Mrrshans are descendants of very large hunting cats, and although they have in general been able to curb their aggressive impulses, the Mrrshans still retain a keen hunter nature. Their sheer ferocity and natural instincts make Mrrshans the best gunners in the universe. Mrrshan ships move first in most situations and add four levels to their attack rolls. Mrrshan ships equipped with multiple fire weapons can be particularly nasty.

Like the Alkari, Mrrshan players should begin the game in an offensive posture and should attack their enemies almost immediately.

The Mrrshan look as though they've evolved from cat-like predators because they have. This genetic heritage has left them with keen senses and fast reflexes, which add 50% to their chances of hitting in ship-to-ship combat. The fierce Mrrshan are Warlords. Despite their mineral-rich home world, only a strict status-based social order has enabled the Mrrshan to control their fierce feline territorial instincts, so they have never been able to progress beyond a Dictatorship government.

This content was not featured in Master of Orion 3.

Descended from legendary hunters, the Mrrshan are the most unpredictable and vicious fighters in the universe. Decisive and confident, they will strike first and without mercy when threatened. Ruthless militarists, the Mrrshan make honorable allies and devastating enemies. However, their mercurial temperament means a treaty with them needs to be backed up by strength.

The blazing savannas of Fieras gave rise to the ruthless warriors known as the Mrrshan, but their hot temper almost proved their undoing.

After years on the brink of civil war, the Mrrshan Emperess rules over her Pride without question. Mrrshan are willful and independent, and their long history as hunters has shaped their culture fittingly.

They see themselves as the peak of predators, and any other life from who crosses their path is regarded as fair game.

They often strike out against even their closest allies just for the sport of battle. They are easily offended, and will pursue relentlessly anyone they feel has slighted them, heedless of the consequences.

The Mrrshan are elegant, rebellious, and independent creatures. They are a highly decorated race with beautiful art, architecture, and flawless personal style. Designs from Mrrshan culture often catch a high price in any market, as their products are exquisitely made and luxurious in nature. Fieras, the home world of the Mrrshan, is a sunny planet with spacious plains, dense jungles, and shining seas. The Mrrshan, while the most intelligent of life on Fieras, are not alone on their planet. They are surrounded by many vicious beasts and creatures, keeping the Mrrshan vigilant against attacks.

These natural predators are thought to be one reason why the Mrrshan became such excellent soldiers later in their evolution. While they are a feudal government, nothing about their laws or policies are oppressive. The Mrrshan as a whole value freedom from religious, creative, political, and personal oppression. They believe in living as they please, loving whoever they want, and above all being fearless in battle.

The Royal Family rules over the feudal government, with an Empress ruling over all. The Empress leads the Mrrshan into battle during times of war and manages her Royal court in times of peace. The Mrrshan royalty are looked upon as the source of strength for their battalions in times of war. The Mrrshan see the skies as a great adventure. They see beauty in the stars and majesty in the phenomena of the galaxies. They fight for freedom and the right to explore any corner of space they desire. The Mrrshan are too adventurous to be kept in the confines of their home galaxy when there are thousands of lands they have not seen. The Mrrshan are some of the deadliest gunners in the universe and they will use those gifts against any who try to block their path.

The Mrrshan Pride seek to blaze a glorious trail across the galaxy. The Mrrshan are a vibrant society of artists, warriors, and nobles who refuse to back down from a challenge and see the open sky as their domain.

The Mrrshan are confident to the point of arrogance, but no adversary should assume that their boasts are mere idle threats. Those who play as the Mrrshan will enjoy their natural aptitude for combat as well as their unmistakable sense of style. 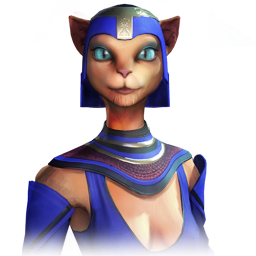 The Empress of the Pride is descended from all the great Empresses of the past: a bloodline can be traced from the current ruler back to the very first monarchs of Fieras. She is personally courageous, never sending a soldier to fight a battle that she herself would not fight in. If the Empress is not in her palace overseeing the feudal government, she is likely to be found on her personal flagship.

She expects the very best of her people and herself, striving to create a universe where no one would dare to infringe on the freedoms of the Mrrshan people.

Harrava has served the Empress her whole life, as her childhood friend, her sister in battle, and finally her Advisor when the Empress took the throne. Despite their close bonds, Harrava remains subservient and obeys the Empress on all matters.

This is not evidence of how little the Empress respects her, but rather a show of how much Harrava reveres and accepts the role of the Empress. Harrava will live and die for the Empress, content as long as she has faithfully and diligently served her friend and sovereign to the best of her abilities.

Mukirr is a ship leader who appeared in Master of Orion II: Battle at Antares, a Mrrshan Commando who has gone full rebel and went out into the Galaxy to find a new cause to fight for. Mukirr is a good leader for your ground troops and massively improves the accuracy of your ships' Beam Weaponry.

The wild grasslands and savannahs of Fieras are the hunting grounds of the strong-willed Mrrshan race. Fieras is a stunning planet, with grassy plains, sprawling deserts, and quiet-seeming seas. The Mrrshan have established themselves as the dominant race on the planet and secured their role at the top of the food chain. Life is not easy on the Mrrshan home world, with many aggressive and violent predatory species roaming the planet. The competition has kept the people sharp-witted and the Mrrshan credit much of their military prowess to their natural skill as hunters.

Jasana is the crown jewel of the planet’s many praiseworthy and illustrious cities. As the seat of the government, the Royal Palace sits in the eye of the city and is the center of all cultural, military, and spiritual happenings of the Pride. The Empress oversees all in her realm, and nowhere else is her presence stronger than among the Countesses, Handmaidens, and Ladies of her regime. Jasana is a thrilling city—a city that dances the line between danger, beauty, and power.

The Mrrshan embrace the idea of freedom so wholly that it defines their very race. They will not be limited to the familiar grasses and sands of home. The first time the Mrrshan looked to the stars, they saw not just countless galaxies marked for adventure, but they grasped the true meaning of freedom. The endless and limitless potential of space exploration thrills the restless spirit of the Mrrshan.

The Mrrshan ships are as unmistakably distinctive and dramatic as the Mrrshan themselves. The frigate-class ships are defined by sleek fins and an aerodynamic body to improve agility in battle. The bravo-model frigates are rounded in appearance with sharp forward-swept canards.

The destroyer-class ships maintain the streamlined style that is characteristic of the Mrrshan fleet, but boast a rear fin identified by its distinctive “bloom.” The colors of the Mrrshan Pride, a deep ruby and shimmering gold, are draped around this deadly ship. The weapons suite is highly sophisticated and crewed by the premiere gunners in the galaxy. Bravo-model ships feature forward-swept winglets for enhanced agility.

Cruisers of the Mrrshan Pride may seem strange in appearance at first, but then the lower fins light up with gunfire and all detractors are silenced. In the unique fins of this class, the Mrrshan have created an innovative weapons suite that creates a well distributed source of firepower. The fins also have an obvious defensive capability, as they shield the underbelly of the ship, which houses many critical systems. The bravo-model ships utilize a particular “infinity loop” design popular with many noble houses of Fieras.

The battleship-class ships of the Pride’s fleets are favorites of the aggressive and hotblooded Mrrshan people. They are agile for their mass and extremely deadly—perfectly suiting the Mrrshan’s natural strengths. The fins of the ship are purely defensive on this model, placed in a way that shields the powerful engines from incoming fire. Alternate designs of the ship are chunkier and more defensively oriented.

The aesthetically inclined Mrrshan tested the boundaries of usability, durability, and design when they created the titan-class ships. Their gambles paid off handsomely with the current standard design, which balances beautiful lines and brutal combat capabilities.

The Doomstars are the ultimate vessels of the impressively well-armed Mrrshan fleet. The Mrrshan have always favored beam weaponry, making the Doomstar’s massive number of weapon mounts nearly irresistible.

The Mrrshan traits cost a total of 11 points, a combination that would be illegal as a custom race (10 points maximum). In addition, Diplomacy: Improved Negotiations is a hidden perk, not normally accessible for custom races.