Sakkra are one of the major civilizations in Master of Orion.

The Sakkra are a race of cold-blooded reptiles which are hatched from eggs like their dinosaur ancestors. Sakkras reproduce at twice the normal rate, and also get that reproduction bonus in addition to the benefits from Fertile or Gaia planets. They even receive the bonus when cloning.

Sakkra players should never allow their planets to fill up. Their advantage is in their growth rate and they should constantly expand and create new colonies.

The Sakkra are a hardy reptilian race with impressive regenerative capabilities. As a result of their low mortality rates, the Sakkra population grows at double the normal rate (+100%). Overcrowding pressures, even on their large home world, long ago forced them to become partially subterranean, living both under and above the surface of a planet. This allows them to support a greater maximum population on every planet they colonise, and it makes their defensive ground troops 10% harder to dig out. These reptiles survive partly because they produce +1 food per farmer and partly because their Feudal government is so efficient at starting internecine wars. The life of the average Sakkra is by no means pleasant. Their dispirited spies operate at -10.

The Sakkra are closest genetically to the original Saurians that forced their own evolution and left the Ichthytosian homeworld in exile thousands of cycles ago. They are highly aggressive, easily angered, and carry a bitter scaly patch on their shoulders. Their age-old hatred of the Ichthytosian species flavors every aspect of their society, and their drive to build and expand is often a pretext for finding and eliminating every trace of their ancient enemies.

The Sakkra are an aggressive race that must constantly conquer new planets to support their teeming population. They shun scientific and diplomatic pursuits in favor of aggressive expansionist philosophies. If they run out of room for peaceful expansion, they will not hesitate to attack anyone who stands in their way.

Primal in their ways, the cold-blooded Sakkra from the planer Sssla seem uncouth and unenlightened to many of the other races. However, their hulking forms and rustic rituals belay an enduring memory that has helped them reach the stars.

They are lorded over by the Hierarch, a long-lived progenitor, and in very literal sense, the father of much of the Brood.

His main concern is for his offspring, whether acquiring colonies for them to reproduce or securing resources necessary for their survival. It follows that the Hierarch adopts a familiar and fatherly tone towards those he regards as allies. To the Sakkra everyone is either part of the family or a hated enemy.

The Sakkra are an aggressive, competitive race that fight to survive on crowded planets with little room for formal laws. They are a physically imposing race that are determined to prove themselves as worthy adversaries against any opposition in the galaxy. The strong are the only ones who survive on Sssla, the Sakkra home world, where there are regular fights to the death in the streets. The only way to stand out in the massive Sakkra population is to show great strength and to defeat any challengers to your claims.

The Sakkra believe that the Mother-God and Father-God bore the first generation of Sakkra many millions of years ago. These first children formed the oldest tribes which Sakkra still claim as ancestors, yet the Mother and Father were so controlling that the first tribes united under a Hierarch to battle them for control. It is said that the battle lasted three days and when it was over, the gods were dead the Sakkra had united victoriously under their first Hierarch. They are a race which fondly remembers the brutal destruction of their own creators, whoever they were long ago. The government of the Sakkra is a feudal system composed of various tribes, headed by a Hierarch which represents them on the intergalactic stage.

The government and the Sakkra people as a whole are called the Brood. It is an established fact that all Sakkra Hierarchs die on their throne. No one walks away peacefully and regime changes are an especially bloody time in Sakkra civilization. The Sakkra military makes up for what the Sakkra lack in diplomacy skills. Sakkra soldiers benefit from natural intimidation skills and a lifetime of internal warfare on their home planets. The Sakkra have a massive population which continues to grow at exponential rates, new planets are necessary to support their population.

As one of the most aggressive races in the game, the Sakkra tear through the galaxy in an att empt to expand their wildly growing population across the stars. Brutal and crude, the Brood leaves an unmistakable mark on the galactic stage. Those who choose the Sakkra must rise to the challenge of a population that threatens to outgrow even the lushest of planets. Their population boasts brute force as an asset and it would be mistake not to utilize their natural gifts for battle. 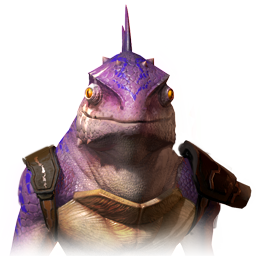 The Hierarch of the Brood is a brutish and ferocious leader. No one may hold the coveted position without first deposing the former leader and killing all vocal adversaries.

The tenure of a Hierarch begins with blood and ends with blood, but the years between are when the Sakkra are at their finest. When united under a strong and bold leader, the Brood swells militaristically and proves to be a worthy adversary for any who contest their claims to greatness.

The Hierarch rules with an iron will and disposition, unafraid to embrace the brutality on which Sakkra civilization is based.

Stego may not be the brightest or strongest Sakkra at the table, but he brings his own unique talents. When the Hierarch was a young brawler on the streets of Sssla, Stego served as his trustworthy look out. The Hierarch would throw the punches and Stego would count the members of the backup squad as they came down the alley. When the Hierarch ascended to the throne, Stego remained by his side and kept a vigilant watch on all potential threats. Trust is hard earned and easily lost in Sakkra culture, but Stego has proven himself time and time again.

Tyranous is a ship leader that appeared in Master of Orion II: Battle at Antares, an battle-harden Sakkra Captain, he offers his serves to those that can pay him. A decent Commando leader for your ground troops and Security expert, his true skill lies in his marksmanship allowing him to improving the range and effectiveness of the Beam Weaponry of your fleet.

The heavy and humid atmosphere of the Sakkra’s home world, Sssla, makes it a dense hothouse of lush vegetation and diverse life. The planet is covered in thick and intertwining jungles that surround a single vast, sluggishly stirring sea. The Sakkra must spread over all habitable land and also burrow deep within the planet in order to support their ever-expanding population. Sssla, along with the Great Sea that is considered the primordial mother of all Sakkra, is a sacred and glorious place that the people will defend to their deaths.

Chordata, the capital city of Sssla, was one of the first cities built by the ancient Sakkra. It was laid out for a much smaller population and today it bursts at the seams, with overcrowded structures crammed into every available space. Chordata is sited at the ideal location between the sea, nearby mountains, and the lush plains where most of the Sakkra’s produce is grown. The Throne of Guanar is located deep beneath the palace grounds in the center of the city; there the Hierarch squats and plots the expansion of the Sakkra people.

The Sakkra are a crude, brutal, and savage race. Despite the cramped quarters and frequent brawls to the death in city streets, Sssla holds a unique place in the consciousness of the Sakkra. As the Sakkra aggressively spread to neighboring planets, the concept of home continues to evolve and adjust to fit the bursting needs of the people. But of all the lands they must conquer to support their booming population, only one planet can be considered the true birth place of the Sakkra.

Sakkra ships are fully utilitarian in their design. The distinctive jagged panels of the Brood’s fleet are primarily defensive in nature, not unlike the shells that many Sakkra carry on their own bodies. The bright green exterior recalls the tropical vistas of the Sakkra’s native Sssla. Bravo designs of the frigate concentrate the panel defenses on the rear of the ship.

Destroyer-class ships boast an impressive crown of thorns in the form of a nearly complete ring of dense panels that can protect vital parts of the ship from incoming fire. The core of the ship is sloped to help deflect enemy attacks. The bravo ship models merge the protective panels and the main hull of the ship for a unified defense system.

The Sakkra cruisers focus their panels on the front of the ship, creating a deadly battering ram which can be used in ramming and boarding maneuvers. The main section of the ship is stout in design and built to take a severe beating. The alternative cruiser design maintains the battering-ram front, though it is subtler in its shape.

The batt leship-class ships of the Brood carry over the most successful design features from two predecessors. The destroyer’s distinct crown of panels is merged with the battering-ram panels of the cruiser-class, creating a battleship that is ready for any type of combat. Bravo models of the ship have a similar design, but incorporate more sloped sections of the main hull.

Sakkra titan-class ships embody the spirit of the Sakkra in battle: the best defense is a good offense. The brute strength of the titan allows it to sustain an inordinate amount of damage, but never at the cost of offensive capabilities.

Durable panels hide the core of the Sakkra doomstar from damage, but it would truly be a feat on the part of the Brood’s enemies if they even came close enough to get a good look.

The Sakkra traits cost a total of 6 points, a combination that would be legal as a custom race, with four points leftover (10 points maximum).