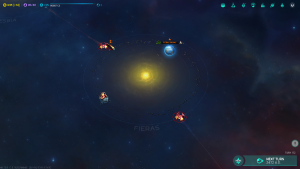 Fieras, the Mrrshan capital system. Although a core system by definition, the absence of other planets means it's going to be hamstrung once interplanetary administration becomes available, unless the asteroid field is converted into a planet.

Sitting just below empire management, system management concerns itself with strategic expansion and goals on a solar system level. While not giving results immediately, as is often the case with colony management, picking the right strategy for each system is essential to long-term success.

Not every system is born equal out of the Big Bang and not every single one will be equally useful. Systems can be roughly divided into several categories:

The types aren't exact and every system will usually have features that classify it into several categories. The classification is also affected by the chosen strategy, however, several common trends can be identified:

In general, when selecting a focus for systems, think how it will be ten, twenty, fifty turns down the road. A huge, rich, but radiated planet, for example, will provide a huge payoff down the road, but will be mostly unproductive early on. Conversely, a small terran planet will easily support a population, but its long-term prospects are limited.

Of course, remember that the interplanetary administration is a game changer and a system with multiple planets increases in value exponentially.

Part of system management is also setting down war goals for the inevitable conflict. It is essentially a mirror of your colonization policy, focused on answering not "how will it benefit the empire?" but how it will harm the enemy. A good rule of thumb is to focus on: