As part of the Unified Community Platform project, your wiki will be migrated to the new platform in the next few weeks. Read more here.

The Trilarian are one of the major civilizations in Master of Orion.

The Trilarians are one of three new playable races that were introduced within Master of Orion II: Battle at Antares in 1996. While the Trilarians undergo changes to their physical appearance with each sequel, they are often described as a race of aquatic/amphibious filter-feeders who abhorred violence in all forms, who are paradoxically both one of the oldest civilizations and one of the youngest space-faring races in the Orion Sector. While Trilarians are pacifist, that does not mean they will not defend themselves or know the horrors of war.

This race was not featured in the original Master of Orion.

Trilarians are aquatic life forms. This race suffers none of the usual penalties associated with living on ocean and swamp worlds. In addition, there is a legend among the Trilarians that their race is descended from a long-lost Antaran colony. Regardless of whether there is any truth to this, this race has proven to be Trans-Dimensional. Even without the aid of FTL drives, Trilarian pilots can move their ships from star to star, though slowly. Ships with FTL drives move more quickly than they ordinarily would. The Trilarian government is a Dictatorship.

The Trilarians are one of the oldest races in the Orion Sector, and are known for being extreme traditionalists. They are a peaceful race, and their society places great emphasis on art, architecture, and philosophy. They have changed very little since the War of the Depths and the Second Exile, trying desperately to regain the glories of their past while preparing for the new future that awaits them in the Orion Sector...

The Trilarians are an aquatic race of beings led by a messianic leader with the title of Stinger. They wish to live peacefully with other races, often “turning the other cheek” to avoid conflict. However, when pushed the Trilarians become deadly opponents who are ruthless when at war. The race worships the “Old Gods”, a religion steeped in cryptic mythology which the Trilarians are more than willing to spread to the galaxy as a whole.

In the depths of the otherworldly oceans of Trilar, the Trilarian Shoal is governed by the Stinger, half dictator and half messianic figure.

His tentacled subjects worship old gods who are fashioned around folk tales and cryptic mythology, whose darker undertones clash with Trilarians’ pacifistic nature and overall friendly disposition towards other races.

They are generally willing to coexist with other races and rarely seek out open conflict, but they are capable of quickly changing face when they believe it is the will of their deities to do so.

The water-born and -faring Trilarians thrive in open seas and skies. Their tentacles and many eyes make them strangers in a humanoid seeming universe, but their strangeness sets them apart in more ways than one. The Trilarians take to the skies as naturally as they do to the seas, unafraid of unknown depths and heights. They are gifted pilots, diplomats, and educators in a savage and wild universe.

Their society was molded by an ancient race of Old Ones which they now regard as gods. These Old Ones gave them early technology and artifacts that set their society on track to reach the stars. The Trilarians now advocate the spread the goodwill and education across the universe, continuing the beneficial legacy that the gods bestowed on them.

Their affinity for peace and constructive dialogue should never be interpreted as weakness, as the Trilarians are deadly when threatened. Once angered, they will strike out with the total confidence in their righteousness, answering to no one but the gods. Athletic, agile, and highly educated, they will fight to the death with the conviction that they are the chosen messengers of the Old Ones. 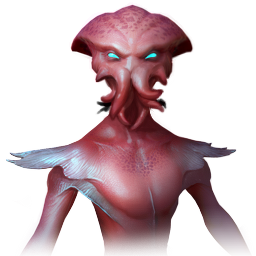 Lathep, the Pilot - The Shadow of the Stinger[edit | edit source]

Aquasarrious is a ship leader who appeared in Master of Orion II: Battle at Antares, a young and eager Triliarian who left Trilar to explore the wonders of the galaxy. While he may not be the best Navigator, he is an excellent Helmsman and knows how to increase the effectiveness of the Beam Weaponry of your fleet.

The Trilarian traits cost a total of 6 points, a combination that would be legal as a custom race, with four points left over (10 points maximum).

The implementation of the Aquatic trait means that for wet planet types (swamp, ocean, and terran), the biome's normal properties for farming and production are substituted with those of another biome. More precisely, this means that terran and ocean planets are considered to be gaia planets, while swamp planets are considered to be terran planets. These substitutions are hard-coded in the engine (GetPerkFarmingFactorOverride() and GetPerkIndustryFactorOverride() functions in Backend.Civilizations.Civilization) and cannot be modded in the yaml files. Other planet biomes are not affected; therefore they do not suffer more than other races on dry planet types such as desert or arid worlds.